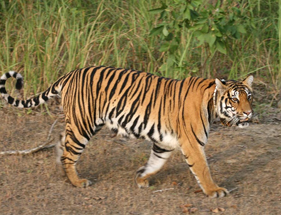 Spread over an area of 940 km² in the districts of Mandla and Balaghat, Kanha National Park is known as one of the largest national parks in Madhya Pradesh. This Tiger Reserve is formed together with a surrounding buffer zone of 1067 km² and the Phen Sanctuary of 110 km² areas. The national park has a large population of Royal Bengal Tigers, Sloth Bears, Leopards, Barasinghas and Indian Wild Dogs. The park has bamboo forests, grassy meadows and lush sal trees, which inspired Rudyard Kipling to write his famous 'Jungle Book' novel. Maikal and Satpura mountain peaks cuddle up this magnificent National Park. The landscapes and the nearby luxurious meadows with wooded strands and the dense maroons of forests provide magnificent sightseeing experiences to wildlife lovers. One of the popular attractions in the park is Bamni Dadar, which is commonly known as Sunset Point and it offers the most striking backdrop of the sunset. 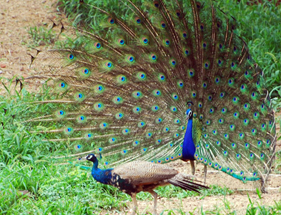