The Tadoba Andhari Tiger Reserve encloses interesting wildlife sightings, bursting with tigers and a huge variety of other wild animals, birds, and reptiles, including leopard, sloth bear, hyena, jackal, wild dog, sambar, and many more. Tiger is the main attraction of this park and the tourists can see them occasionally in the deep forest or near the lake. It is one of the most popular tiger reserves in India, known for best tiger sightings. There are a lot of other wild animals in Tadoba Tiger Reserve, here are some details that can give you an insight of wildlife in Tadoba tiger reserve. 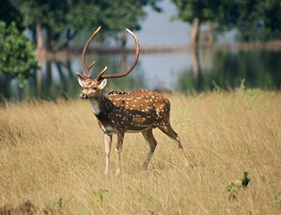