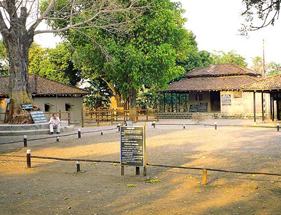 Sevagram is a small village, situated at the distance of 8 Km from Wardha. Mahatma Gandhi Ji set up his Ashram in the outer reaches of the village where only a thousand people lived. Seth Jamnalal Bajaj of Wardha, a follower of Mahatma Gandhi offered 300 acres of land to the ashram. The ashram later on employed some harijans in the common kitchen to remove caste barrier.